It’s more important than ever that the climate movement (that’s you!) takes a stand against plans to expand fracking gas projects across the continent. With the government hell-bent on handing hundreds of millions of taxpayer dollars to their mates in the oil and gas industry, and multi-national companies champing at the bit to start fracking on Aboriginal land, we must work together to stop them.

Last week, people from all walks of life turned out at their politicians’ offices to share their vision for a gas-free future as part of a #FundOurFutureNotGas week of action. We couldn’t be more proud of your efforts. 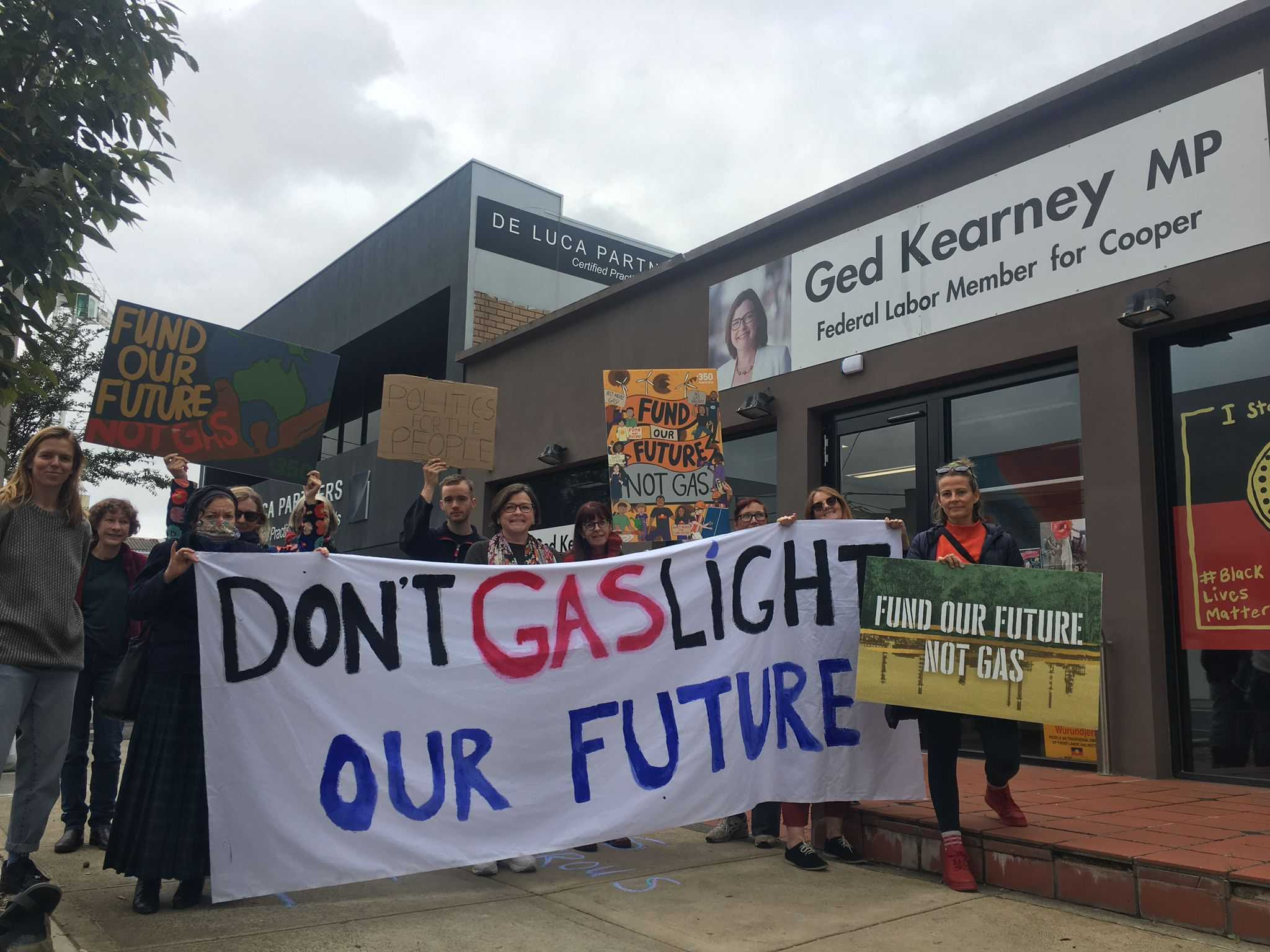 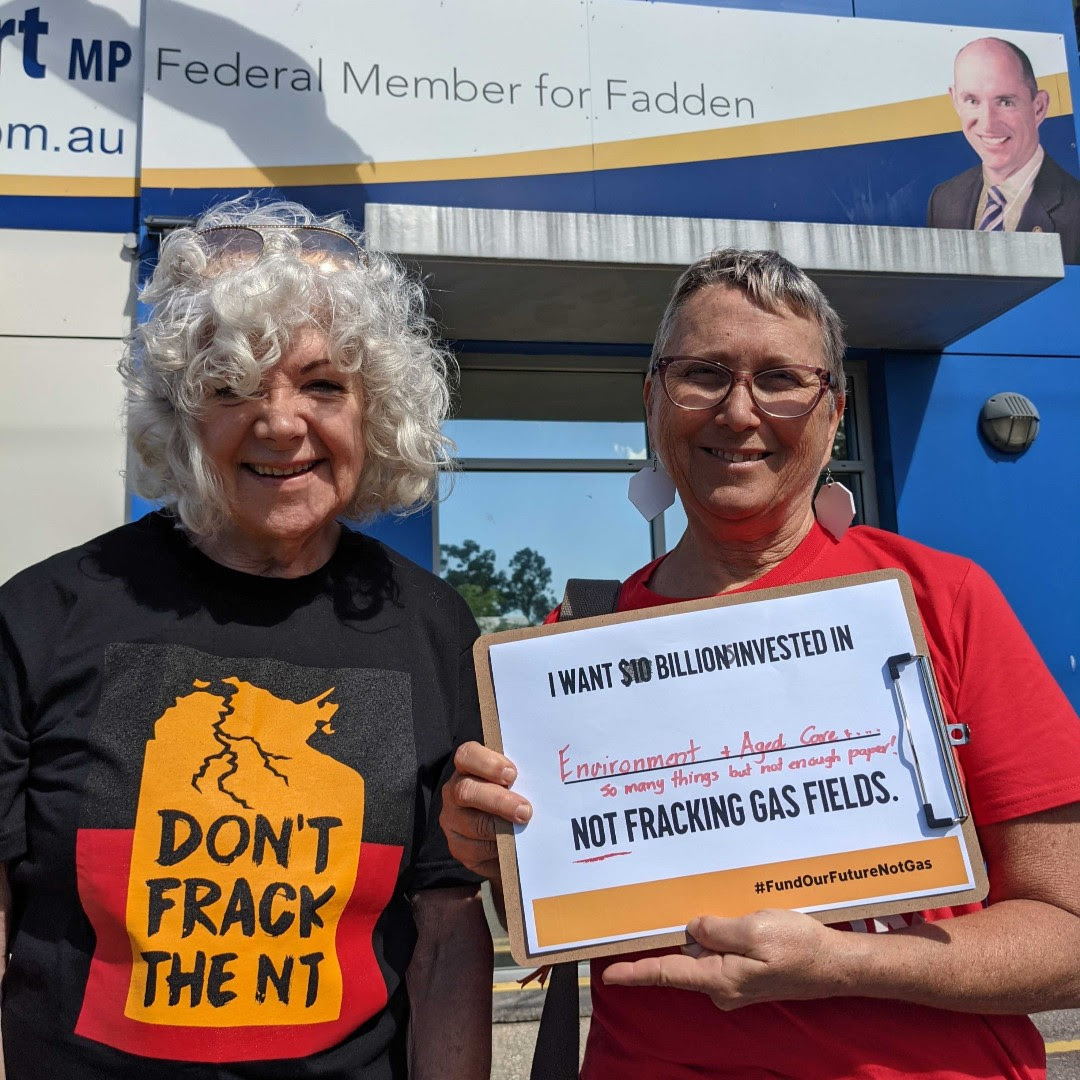 From Perth, to Darwin, to Lismore, Melbourne, Gold Coast and 20 other locations, Fund Our Future Not Gas was plastered across politicians’ offices, and the ideas from communities across the country were delivered to MPs – whether they were on post-it notes, big banners or knitted scarves! 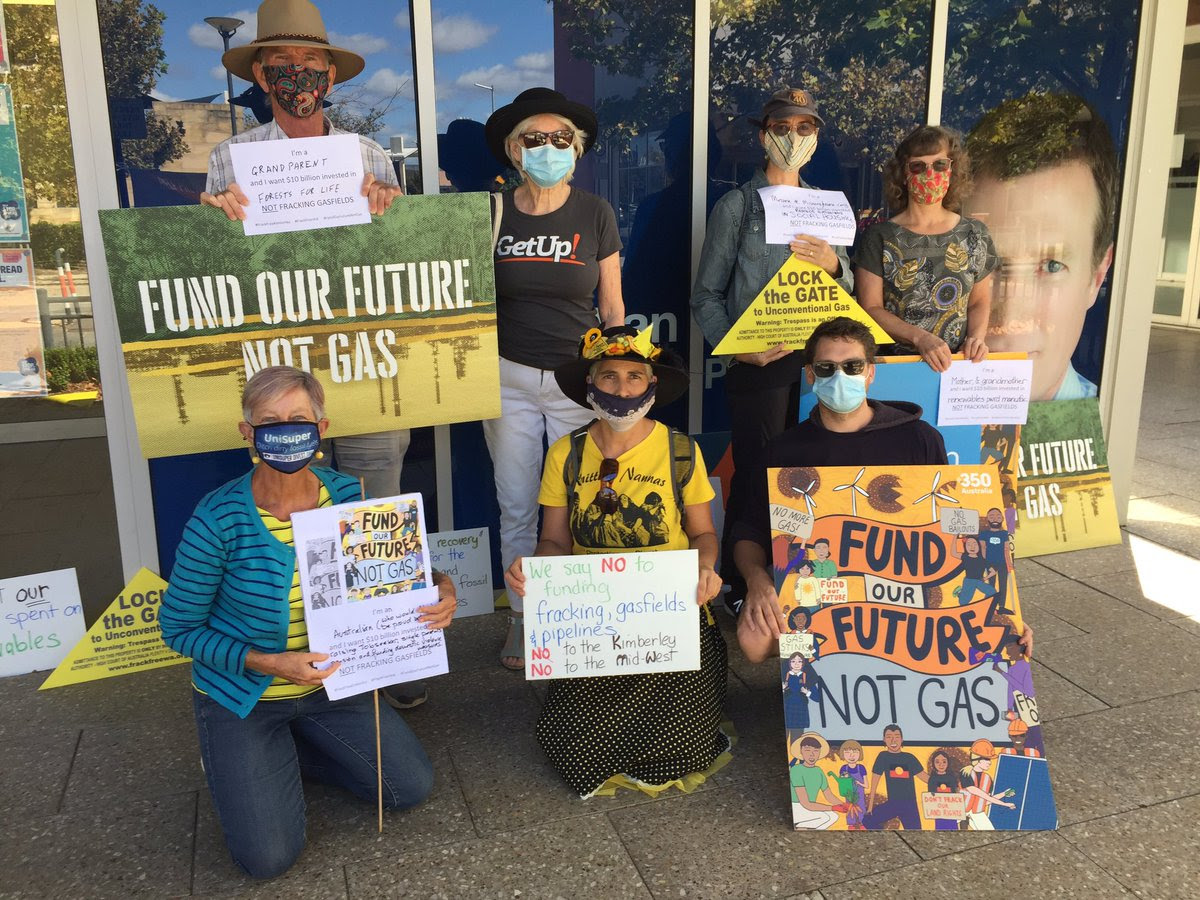 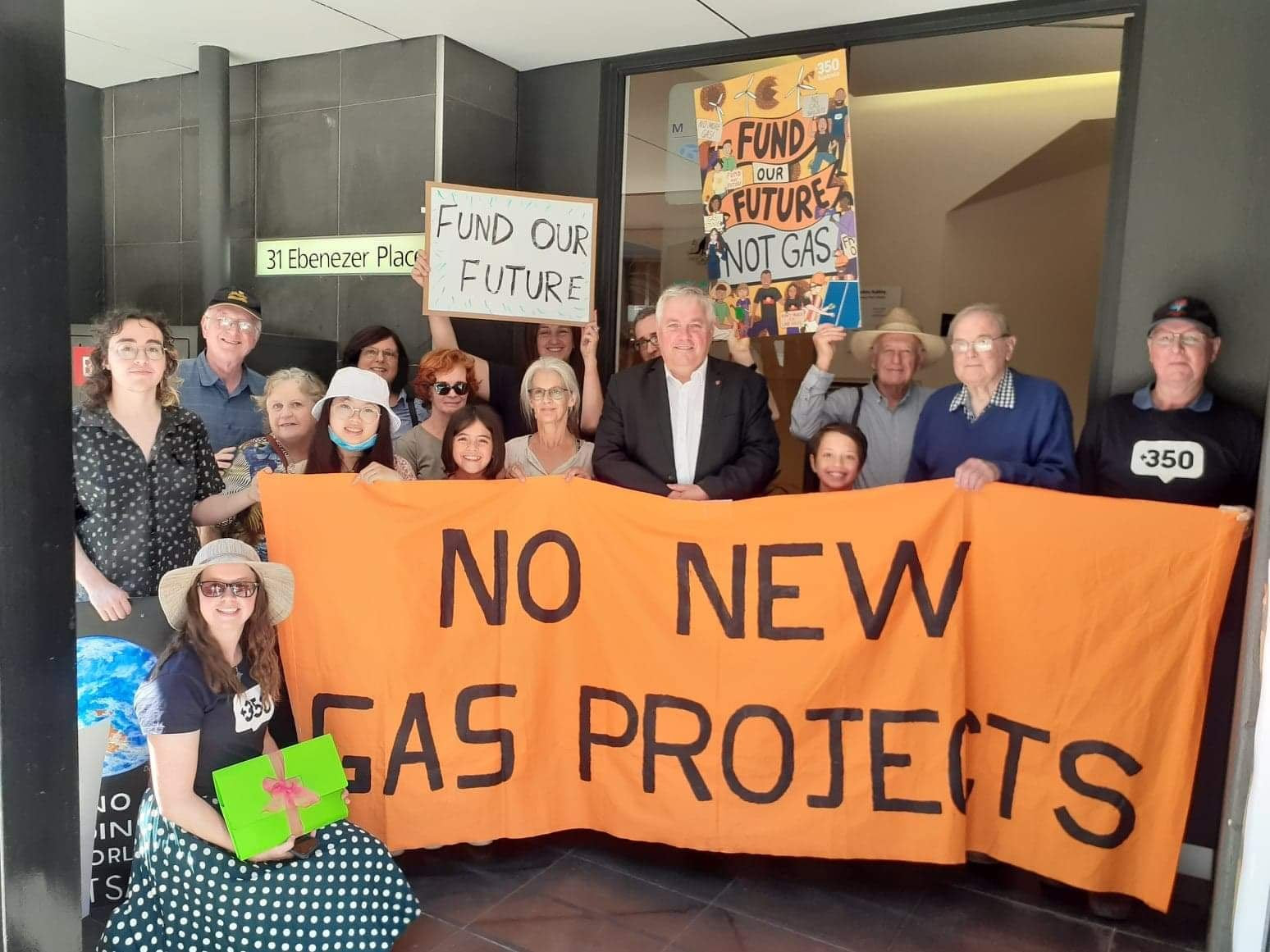 You can read the full report here of all of the amazing ideas for a People’s Recovery that we collated across surveys, photo petitions and submissions. If you shared your idea – thank you, your voice is powerful and your vision inspiring.

We worked together across organisations and movements – from the young people at the Australian Youth Climate Coalition and Seed, to the Knitting Nannas Against Gas, because together we’re more powerful than we are apart. 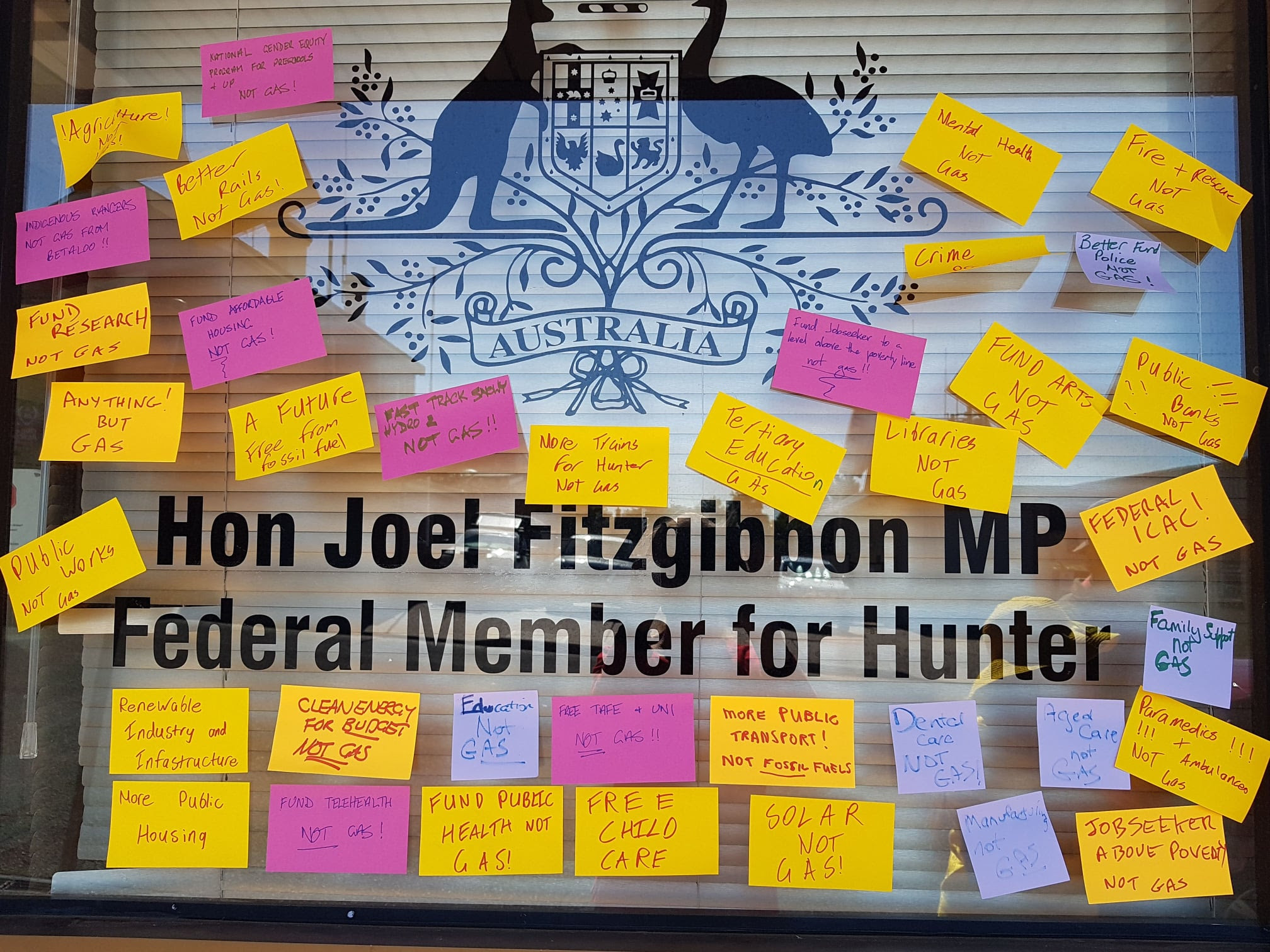 Hundreds of you took part in the 10 days of action online too – writing to the Treasurer, making memes, signing petitions and sharing on social media. Together we made an epic splash to make sure that this government knows that the tide is turning against gas.

Just days out from the Federal budget, our movement has demonstrated that we are fired up about their plans for a mass expansion of fracking gas fields across regional and remote communities, and we’re not going to be silent.

Only organised, diverse and fired up social movements can stop these ludicrous gas handouts. We have people across the country who turned out last week, but we can’t stop now.

We are so proud to be part of a diverse, ambitious and hopeful movement for climate justice, willing to speak truth to power holders and unafraid to share their vision for a better world. Thank you for all you do.

If you’re keen to get involved in local activism to stop the expansion of fracking gas fields, click here to sign up to be involved in a local 350 group and one of us will be in touch with you.

To read all the details about the planned $903 million spending that’s been announced since September last year, check out our brief for the media here, and share with your friends on Facebook and Twitter.