We’re certainly not finishing 2018 without a fight!

As the year draws to close, it feels like a turning point is coming for climate action in Australia.

In this final month of the year, we are seeing sustained pressure on politicians of all stripes to commit to real climate action and grassroots groups stepping up to fill the leadership void!

It’s a fitting end to a huge and successful year – and we’re ready to maintain the momentum for change in 2019. 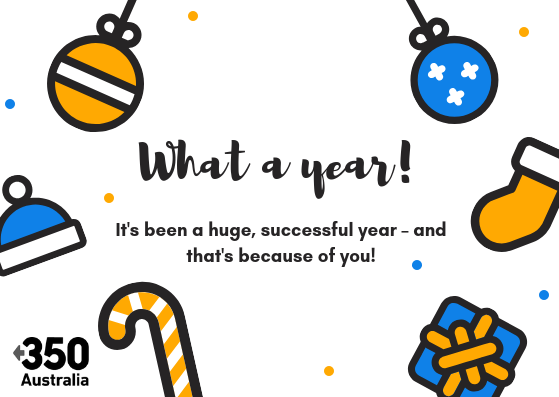 This year couldn’t have happened without you. Together we:

Phew! Everything we achieved this year is thanks to the 350 community – that’s you.

But we know that next year our efforts need to be even bigger, bolder and louder.

Because of you, 2019 will see a federal election dominated by the issue of climate change. We’ll be ramping up our calls for climate action in the lead up to the federal election, with plans to make Vote #1.5 – that’s voting to keep global warming under 1.5°C – the focus in every single electorate. And while Adani is still saying they plan to start digging coal before Christmas, we will #StopAdani. Just watch.

If you want to chip in to support local groups and passionate people all over the country taking action during the Vote #1.5 campaign, click here.

Does anyone else feel like 2019 is the year we finally beat the climate blockers? We can’t wait to keep winning with you.

Wishing you a safe and restful summer break.

PS. As an independent not-for-profit organisation, 350 Australia relies entirely on public donations. Becoming a monthly donor will make you a Climate Defender, and you will be contributing directly to cutting-edge campaigns to address the climate crisis. Consider becoming a regular giver Climate Defender this Christmas, and help us look forward and plan how we best use our resources in the coming year.